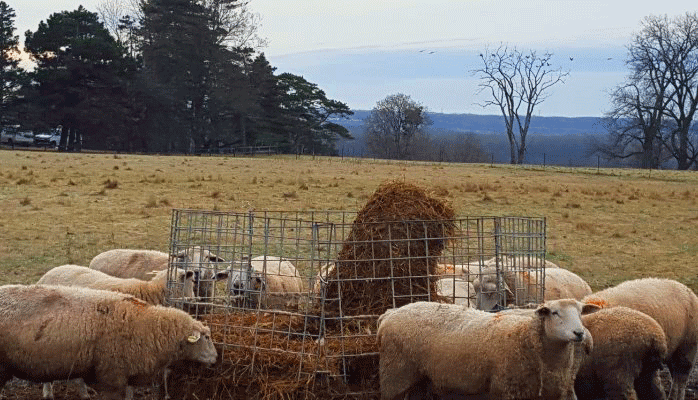 This sheep farm is one block from the Mall of America. It is the last working farm in Bloomington, MN. In the background you can see the Minnesota River Valley and 11,000 acres of publicly owned (Federal, State, and City) land that lays lifeless and barren outside a parvenu of rank inedible, non-flammable  species.

The land was once an oak savanna, the most evolutionary advanced, functional and productive terrestrial ecosystem to ever exist. Grazing animals groomed the savanna for the past 30 million years. More recently, humans showed up and used fire to maximize grazing and savanna. The vegetation, over time, evolved from defending against grazing, to becoming tolerant to grazing, to becoming “Obligate” to grazing, and the earth evolved to become savanna.

When Europeans arrived, guns, trapping and market hunting quickly decimated millions of elk, beaver and bison.  Fortunately, domestic livestock were used on land to steep, wet or dry to plant to crops.  The livestock in turn groomed the savanna and the farmer used fire to prevent leaf-fall from smothering ground layer vegetation that was composed of native flowers and grasses.  Obviously the domestic stock weren’t pushed by predators, and so it was different than before, but any sort of grazing was better than no grazing, because the vegetation was “Obligate” to grazing.  Most farmers were good shepherds of their herds, which meant they were also good stewards to their native pastures. “Over-grazing” wasn’t a widespread landscape feature as much as it was an isolated symptom of a severe mental illness.

In effect, grazing by domestic animals provided a surrogate to the previous grazing by wild animals.  Grazing by domestic stock maintained an incredible diversity of native plants. Many wildlife species were also dependent upon the heterogeneity of vegetation structure, “game” trails, and dung piles.  Many of our rare bird, reptile, amphibian, and mammal species were likewise obligate to grazing.  These grazing animals acted as a nutrient reservoir; for example bison, elk and beaver acted as a 28 BILLION pound nitrogen (N) pool, where  the N was in the animals and not the soil/water.   The impact of grazing on the land, as an intermediate disturbance that maximized biodiversity, and as a nutrient regulation mechanism, for the past 30 million years, was so amazing that I can no longer understand vegetation outside the context of grazing; it doesn’t make sense.

The ecological state of the MN River corridor, and any place elsewhere where biomass harvest (e.g. grazing) has been eliminated is highly dysfunctional.  As stated in the opening paragraph, the once edible vegetation has been replaced by non-edible vegetation.  The feed-stock of the current landscape can’t support a mouse, let alone a rabbit, or elk, or sheep.  Likewise, the bare soils are rapidly eroding, and the new vegetation is rapidly rotting nitrogen and phosphorus into our waterways.  The land is dead.

The fact that this transition has wasted millions of acres represents a real threat to humanity.  The land needs to be restored back into it’s once edible state.  We can rid the site of the current weedy configuration, and we can reintroduce a more desirable vegetative configuration. But we can’t hold it without grazing animals and humans shepherding the herds and caring for the native pastures, in essence becoming savanna again.  Grazing animals are key to this restorative process. This grazing produces amazing products such as quality savanna fed meats, dairy products like fine cheese, leather, and of course my favorite, the most excellent fiber on earth, wool. Marketing these fibers and food offers us jobs in restoration, husbandry, processing, marketing, and branding.  We aren’t just restoring a savanna, but instead we are restoring an entire social-ecological system.

A cornerstone to Resilience is autonomy.  If Bloomington could supplement the Twin Cities Metro area with high quality food and fibers while increasing ecological integrity and creating jobs, where do I ask, might this end? Help yourself  and your community by helping us save the sheep.