From an ecosystem perspective, we are forced to place pollinators into their appropriate thermodynamic niche: they are first order consumers, or herbivores, aka grazers. Pollinators emerge at the same time as the ungulates and angiosperms, during the late Cretaceous, marking the dawn of the greatest symbiotic coevolutionary event earth has experienced, when vegetation and herbivores begin to become codependent upon one another. In other words, the herbivores became dependent on the vegetation, and the vegetation became dependent on the herbivores.

For pollinators it began with primitive beetles eating flower parts and indirectly carting pollen to neighboring flowers. It was clumsy, but it worked, and so it advanced. Eventually plants developed nectar to feed pollinators, and by 10 mya, our current pollinator community composed of nectar eating Hymenoptera, Lepidoptera, Diptera, birds and mammals was in place. The same evolutionarily trends occurred for all grazing beasts, from small Cretaceous forest dwelling seed eaters and browsers emerged the massive herds and flocks traversing the savannas of the Holocene. The vegetation evolves through this period from being non-edible to highly edible, and likewise the herbivores became increasingly more edible to the second order consumers, aka carnivores. And so evolves longer more advanced food chains which increase ecosystem function, service, and regulation of energy/matter flows and climates.

At the advent of the Holocene, the dominate vegetation was all edible, providing super high quality forage, browse, fruits, tubers and nectar to a variety of herbivores, both vertebrate and invertebrate organisms. The grazers were dependent on this high quality vegetation and the vegetation was dependent upon high quality grazers. Both plant and herbivore became obligate to one another to the point that the loss of either would doom the other. When we removed grazers form the landscape, non-edible vegetation rapidly replaced the edible vegetation. From this perspective, restoration becomes the practice of transforming non-edible biotic communities back into edible biotic communities. 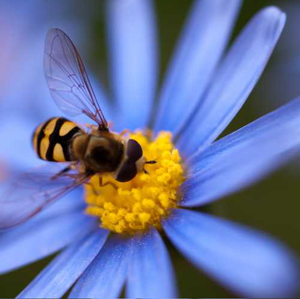 Pollinators are not different from any other herbivore, from giant mammoths to the smallest bee, cross-sale morphology predicts each niche spaced is filled by some organism eating vegetation. All grazers emerged together, as a small force, and have co evolved since to become the most powerful terrestrial force ever. Through the remainder of this document, I use the terms herbivore, grazers, and pollinators interchangeably, they all refer to the same thing, the first trophic level. It is impossible for me to consider pollinators anything else but grazers. This narrative forces us to shift our focus from restoring pollinator habitat to restoration of grazing, or edible ecosystems.