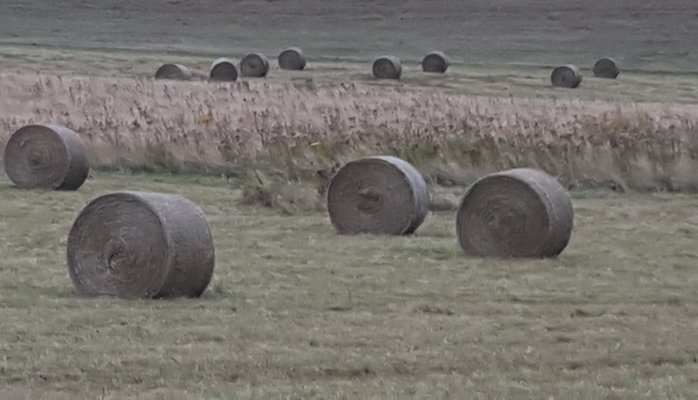 Impacts of haying on soil nitrogen levels, and subsequent feed backs in plant and pollinator communities

Null hypothesis: Biomass harvest will have no impact on total soil nitrogen or on floristic and pollinator quality & diversity.” (Of course we hope to reject the null hypothesis)

There’s a global phenomenon whereby high quality plant communities are subsumed by invasive low quality plant species (Figure 1). This phenomenon represents a threat to both plant and pollinator diversity and global sustainability. Restoration represents an attempt to reverse this trend; however, even our best efforts often fail to achieve floristic quality objectives outside of unsustainable subsidies of time, labor, and expense.

There are attempts to immobilize soil N through additions of carbon (Magill et al. 2000); however, the N still remains in the soil, and now with an addition of soil carbon, may create the perfect storm down the road. Haying, on the other hand offers a relatively non-invasive yet efficient mechanism to mine N from the soil. Haying early successional grassland communities can remove up to 300 pounds of N per acre per year (Kansas Biological Survey 2010). Lowering soil N will decrease invasibility while at the same time increasing the diversity of native plants (Tilman 1988, Bobbink et al. 2010). Some research suggests that many of the low quality plant species we battle are invasive in response to increases in soil nitrogen (Bobbink et al. 2010, Galloway et al. 2004). These plants are termed “nitrophiles” (Curtis 1957) due to their affinity for high nitrogen soils. This knowledge questions our current method of controlling species invasions by targeting the species while the neglecting the cause, excess nitrogen (N). This research proposal attempts to identify the impacts of biomass harvest (haying) on soil N levels and the subsequent response in the plant and pollinator communities.

Since floral variables alone give an incomplete assessment of the effectiveness of restoration-haying, this study will also examine pollinator abundance, diversity, and floral interactions in hayed and control plots. Haying methods will be designed to minimize direct and indirect negative effects to pollinators, e.g., by mowing as late as possible after peak bloom while still meeting farmer hay-quality objectives, and by haying in a patchy matrix leaving uncut areas that provide food and nesting resources for bees throughout the entire season. Anticipated benefits of haying to pollinators include higher diversity and abundance of forbs during the spring season when nectar and pollen is most limited; lower abundance of nitrophilic forb species that provide little resources for pollen; and higher forb-to-grass ratio in hayed plots.

Nitrogen (N) pollution from atmospheric deposition and agricultural runoff has increased soil nitrogen in excess of 3xs since 1860 (Galloway et al. 2004, 2010). Like our fresh water and estuary ecosystems suffer from phosphorus and nitrogen eutrophication, our soils too can also be considered eutrophic, and the same general principles apply. Excess soil N facilitates invasion by rank aggressive vegetation such as reed canary grass (Phalaris arundinacea), quack grass (Elymus repens) nettles (Utica spp.) ragweed (Ambrosia), buckthorn (Rhamnus), and thistles (Cirsium spp) to mention a few (Curtis 1959). Nitrophilic plant species have the tendency to out-compete more desirable vegetation, reinforce high nitrogen flows, and are generally non-palatable to herbivores, including pollinators. The non-palatability issue is of great concern, as it sets in motion a trophic cascade (Pace et al. 1999) that facilitates a transition from highly functional, diverse and provisional ecosystems into dysfunctional low diversity, and non-provisional ecosystems. It’s a classic example of a catastrophic regime shift as predicted in alternative stable state models (Scheffer et al.). Regimes shifts occur following the loss of keystone biotic controls (e.g. Native American fire, herbivores), which facilitates system chemical imbalances, such as too much available phosphorus and nitrogen at any one time, which allows the functional state to be overwhelmed by low quality species (figure 1). Catastrophic regime shift and alternative stable state theory offer us a robust framework for understanding the systems we attempt to restore.

Haying offers a mechanism to reduce soil N. Once soil N levels fall below a threshold, low quality plant species are at a competitive disadvantage and their cover is greatly reduced and replaced with higher quality plant diversity, and more importantly, a more edible vegetation consisting of forbs and grasses. Haying at appropriate times can encourage a particular type of plant community. For example, haying the first week of August will reduce the competitive advantage of warm season grasses while encouraging cool season (both vernal and autumnal) blooms.

Rx-fire offers one such process, but it is becoming more difficult to conduct fire at the appropriate intensities and frequencies required to achieve floristic quality objectives, especially at the rural urban interface. Grazing offers us another process to reinforce desirable vegetation configurations. However, grazing requires major infrastructure including fencing, tractor-trailers, shepherds, and processors, much of which is absent in our current social-economic structure, and increasingly so at the rural urban interface. On the other hand, haying offers a management technique more predictable than fire, and less costly for startup than grazing. Haying requires little infrastructure outside a healthy native hay field.

Proper haying will allow land managers to achieve different vegetations depending upon when and how often they decide to hay. Well-designed management units could achieve both high quality cool and warm season vegetation. A full and more complete array of flora should benefit many types of wildlife including pollinators. Haying can be coupled to fire which creates an even more heterogeneous patch work of vegetation. Proper haying management will also offer us a service in the form of forage to feed livestock. In essence, we restore a food chain, which from the ecosystem perspective would be the ultimate goal of any restoration.

Although the research we propose for this project is designed to only identify the impacts of biomass harvest (haying) on soil N levels and the subsequent response in the plant and pollinator communities, our research will continue in the future, working to identify rotational haying schedules for grassland / savanna restorations, that optimize floristic quality and pollinator habitat. There’s a potential for hay-making to become a common cultural practice in land management. Like other disturbance regimes (e.g., grazing and burning), haying can be a critical tool for structuring plant communities by suppressing the growth/encroachment of aggressive vegetation. In addition to removing excess nutrients off site, thus suppressing nitrophilic plant species, haying can also reduce light competition by tall grasses and forbs, allowing low-growth form plants, including many spring and late fall blooming flowers, to thrive. It is these spring and fall blooming species we fail to recruit in most restorations, and it is these spring and fall blooming species that are so critical to pollinator success.