The current wooded state of many abandon lands creates an impression of “forest”, but the forest perception is dangerously incorrect and has facilitated a century of mismanagement. True forest is Cretaceous in origin, emerging in the shadows of dinosaurs. True forest still exists, and can be found in scattered localities from Southeast Minnesota and down through the Appalachian and Ozark Mountains. It’s limited to fireproof patches, typically on steep northeast aspects, especially in association of creeks, streams, and rivers. True forest is beautiful, yet primitive, supporting small delicate isolated creatures with primitive characteristics.

The current wooded state is far from forest, and never will be forest. Instead, the current state is symptomatic of a catastrophic shift from a highly functional ecosystem to a highly dysfunctional ecosystem. There’s no aesthetic quality associated with the current state, in fact, proper perception should cause feelings of disorientation, confusion and frustration. What we erroneously call forest is merely an overgrown mess of weedy, non-edible and rotting vegetation that provides few, if any, benefits to wildlife, humans, and the biosphere. Indeed, we can view the current state as a threat to the biosphere, as it rapidly sloughs nutrients, such as nitrogen, phosphorus, and CO2 that negatively impacts water quality and violates climate self-regulation. 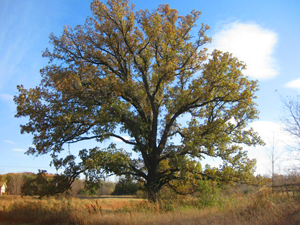 Tragically, over the past century most of Earth’s savannas have been lost, some to urbanization, some to intensive agriculture, and paradoxically, a significant proportion of savanna has been lost to negligence of our public lands and natural areas. The loss of savanna locally and globally equates to a decrease in Earth’s life support systems. If we value life, and Earth’s capacity to support life then we should be discussing how to restore the ecological integrity of the corridor. 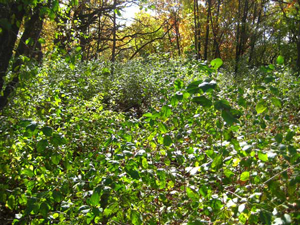 Savanna vegetation is dependent upon grazing, that’s why it’s edible. (The word “grazing” here is implicit to all herbivore forms including grazers, browsers, frugivores, nectarivores, granivores, and so forth.) Savanna vegetation needs to be consumed by grazing animals or it will disappear. The relationship between savanna vegetation and the herbivore is a 35 million year coevolutionary process. More recently, Homo sapiens showed up and employed fire to maximize savanna and grazing. Grazing animals and humans using fire became the “biotic-controls” which maximized savanna. Early settlers continued to practice grazing and used fire to maintain native pastures. Some farmers overgrazed and damaged the land, but this was the exception, why would you destroy the resource that sustained your livelihood? But as usual, a few bad farmers gave the entire practice of grazing a bad name. Conservation soon became the practice of removing humans and their herbivores from the land. Bambi’s mother, in the 1942 Walt Disney classic, does an excellent job summarizing our current conservation paradigm, in the scene where she sniffs the air and exclaims, “Man is in the forest”, a quote which helped facilitate and reinforces our thinking “if we can remove man from the forest, nature will take care of herself”. Instead, by removing the “biotic controls”, herbivores grooming savanna and humans using fire to maximize grazing, nature spun out of control and soon crashed into the dysfunctional state we see today.

The next time you walk into a “forest” notice the weedy vegetation, lack of ground-layer vegetation, the amount of rotting vegetation and the lack of wildlife sign. Also, through the parvenu of weedy trees such as ash and elm, notice the original trees, the ancient dying oaks, trees that knew bison, elk, passenger pigeons, and Amerindians. The oaks are now in the stranglehold of fast growing weedy trees, stressed by lack of sunlight and high humidity, they’ve become susceptible to pestilence and disease, and we are but one windstorm away from losing these majestic keystones species.

The resulting intense shade has eliminated the once diverse groundlayer vegetation composed of grasses and wildflowers, and now 80% of the soils are bare and eroding, filling and defiling our aquatic communities. The vegetation that does persist is primarily non-edible, which in turn facilitates a trophic cascade, or the collapse of food chains, and thus the elimination of almost all wildlife. The excessive amount of dead down wood, wood that would have been consumed by Amerindian fire, now rots and fills the soil with excess nitrogen. The shade, bare soil, and excess nitrogen creates a perfect storm for invasion by a shade tolerant, nitrogen loving species such as buckthorn and garlic mustard*. The transition is complete, and the highly functional, provisional, edible savanna has now been replaced by a dysfunctional, non-provisional, non-edible, rotting vegetation that offers few, if any, benefits to wildlife and humans.

What can we do? 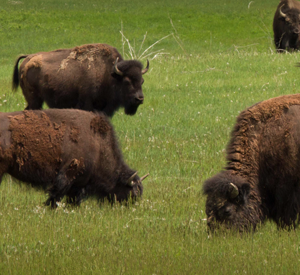 Restoration of these lands will be expensive, but critical to our efforts to restore water quality, wildlife habitat, aesthetic and recreational opportunities, and food and fiber production on real time solar energy (RTSE). Restoration is a three legged stool. We are proficient at the first two legs but lacking thoroughly at the third leg. The first leg requires reductions in undesirable vegetation. The second leg requires enhancement of desirable vegetation. The third leg requires the restoration of keystone processes that reinforce the desirable state, and that means restoring grazing, humans using fire to maximize grazing, and humans using wood for construction and firewood. If we fail to restore these keystone processes, we will enter into an unsustainable battle of chemical warfare and hand-to-hand combat to achieve a semblance of the former vegetation but without any of the former function. We cannot spray our way out of buckthorn, garlic mustard or reed canary grass, but instead we need to restore the processes that reinforce a desirable biotic configuration**.

The land needs to be grazed and the land needs humans as active participants. The MNRC offers us an opportunity to showcase a model master plan that improves ecological health, provides humans with quality food and fibers, and creates an economic incentive for more restoration. This type of restoration is linked directly to emerging markets for locally produced, value-added products including craft dairy, meat, wool and leather products. Branding these products green will help increase sales and provide an economic incentive to expand this type of restoration to other communities along the MNRC and elsewhere. Demand for high quality products produced in ways that improve ecosystem health, help fuel a new economic engine that increases vitality, autonomy and resilience for rural communities. Technical colleges will need to develop new programs in livestock husbandry and culinary sciences, while universities gain research opportunities examining grazing impacts on ecosystem integrity. Restoration will come full circle when we can place on our tables and backs products produced in ways that improve the ecological health of our land, and thousands of people are fruitfully employed in jobs linked to the supply side of restoration and conservation.

This vision of how we could restore the ecological integrity MNRC is different from how we currently conduct conservation. Instead of idling land, we now empower it. Instead of being a tax burden, conservation becomes a tax base, at very least off-setting management costs, at very least providing incentives for maintaining the land in a healthy state. If we can brand and market this type of conservation, then we can attract producers, processors and consumers seeking quality products produced in ways that enhance social ecological systems. It’s a win-win for ecology and the economy, providing us an aesthetically beautiful functional ecosystem, good jobs, and high quality foods and fibers.

And so, while the environmentalist and planners debate trail surface type and location, the old oaks moan with grief at paradise lost, and we as a community are losing an opportunity to develop a showcase model for the world on how we can restore ecological integrity, provide healthy foods and fibers and create jobs.

* Buckthorn and garlic mustard are not invasive, but rather we have created their perfect environment. Instead of dealing with the species, using copious amounts of pesticide, we should instead be focusing on invasibility, or why did this species become invasive.

** A well-designed trail system is critical for success.